The cheerful strum of ukuleles is an unexpected treat as it drifts down the hallway at Paris Gibson Education Center.

The city’s alternative high school doesn’t offer a formal music program, but thanks to a grant from the Great Falls Public Schools Foundation, dozens of students are getting a fun chance at music education. 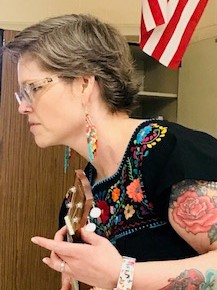 The ukulele lessons are the brainchild of Rikka Walters, the attendance secretary at Paris.  The school is known for having all its staff engage with students, and Rikka does just that.  She wrote the grant for the program, and she teaches the students and runs the ukulele jam fests.

Rikka played guitar in high school, but only picked up the ukulele six years ago.  “Now I’m totally engrossed in it,” she said.  “It’s the best form of stress relief.”

Last year she learned that North Middle School was using ukuleles, and she asked to borrow several for a month.  They were such a hit she decided to write a grant to purchase instruments for Paris.  “Ukuleles are simple to pick up, and you don’t need a music background to get going,” she explained. 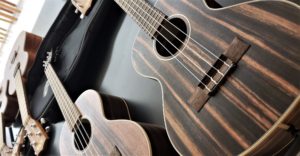 The $2,500 grant allowed her to purchase 15 ukuleles, including sopranos, concert, tenor and baritones, along with special storage bags, tuners, and extra strings.  Made of mahogany, ebony, and Pacific walnut, the instruments are high quality and will last for years.

With a background in art therapy, Rikka knew the ukuleles would have immediate benefits.  “Playing an instrument is a mindful activity,” she said.  “Playing is a form of active meditation that engages most of the senses and has been shown to help in treating anxiety and chronic pain.” 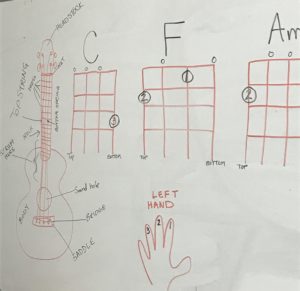 The ukulele project is just one example of the education innovations made possible by local contributions to the Foundation.  This school year saw $111,430 granted to classrooms and programs across the district.  In the past nine years, more than $785,459 has gone to local schools.

“The Foundation’s grant programs allow teachers and schools to explore new teaching methods and engage students with innovation and creativity, and we provide the tools and resources necessary to implement these programs,” said Dave Crum, the Foundation’s executive director.  “Ukuleles may not work for every school, but they definitely work for Paris.”

Setting up an educational scholarship fund can be a meaningful way to give back to your community or to honor a loved one. There are a number of things to consider when planning a scholarship. Please contact the Foundation for assistance, we are happy to help you. Contact Dave Crum at (406) 268-7340 or Dave_Crum@gfps.k12.mt.us.